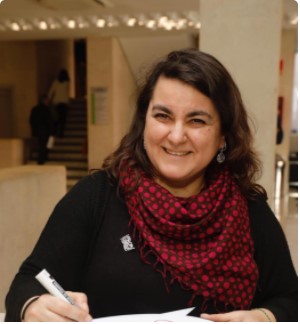 Silvia Martínez Cano is a multidisciplinary artist. She holds a doctorate in Education, she is a Conservator Restorer of Cultural Goods (BBAA), holds a masters in Visual Arts and Education, she is an Architectural Technologist, and holds a degree in Fundamental Theology. In the arts, with her work she investigates from a triple perspective: women, education, and theology. She has regularly displayed her work in collective exhibitions since 2007, in cities such as Logroño, Madrid, Ávila, Valencia, Vitoria, Cáceres, Badajoz, and San Sebastián. She is part of a research group working on Art and Theology at the University of Winchester, at which she exhibits her work annually (20th of June to 20th of July 2019). She was awarded the National Prize by la Fundación Santa María for her Educational Simulation Games (1994), and the photography prize MAV & MÍA 2013. She is a member of the association Mujeres en las Artes Visuales (Women in the Visual Arts) since 2012, and a member of the EmpoderArte collective since 2013. Currently she works at the Universidad Pontificia de Comillas (SPAIN) as a lecturer in Theology. She is the current president of the Asociación de Teólogas Españolas (Asociation of Spanish Female Theologians).

(Mary on the way)